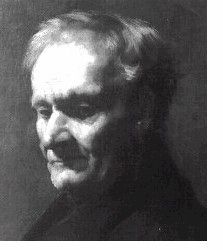 Jan Evangelista Purkinje was born in Libochovice, Bohemia (Czech Republic) on December 17, 1787. He graduated from the University of Prague in 1819 with a degree in medicine. After publishing his doctoral dissertation on vision, he was appointed as Professor of Physiology at the University of Prague, where he discovered the phenomenon known as the Pukinje effect (as light intensity decreases, red objects are perceived to fade faster than blue objects of the same brightness). He also re-published his doctoral dissertation as the first volume of Beobachtungen und Versuche zur Physiologie der Sinne (Observations and Experiments Investigating the Physiology of Senses). The second volume, which followed in 1825, was subtitled Neue Beitrage zur Kenntnis des Sehens in subjectiver Hinsicht (New Subjective Reports about Vision). These two volumes contributed to the emergence of experimental psychology. Purkinje created the world’s first department of physiology at the University of Breslau, Prussia in 1839 and the first official physiological laboratory, known as the Physiological Institute, in 1842.

Purkinje’s experimental method used to explore the parameters of the sensory experience helped lay the foundation for future laboratory work. Purkinje observed the psychological consequences in visual experience after stimulation, including application of pressure and electrical current to the eyeball, alteration in point of light exposure relative to fovea, degree of eye movement and variation in the intensity of light. He is best known for his discovery, in 1837, of Purkinje cells, large nerve cells with many branching extensions found in the cortex of the cerebral cortex. He is also known for his 1839 discovery of Purkinje fibers, the fibrous tissue that conducts the pacemaker stimulus along the inside walls of the ventricles to all parts of the heart. Purkinje introduced the scientific terms plasma, to describe the clear liquid remaining after blood has been cleared of it’s various corpuscle components, and protoplasm, used to describe young animal embryos.

Purkinje was the first to use the microtome (to slice thin tissue sections), glacial acetic acid, potassium bichromate and Canada balsam in the preparation of tissue samples for microscopic examination. Purkinje described the effects of camphor, opium, belladonna and turpintine on humans in 1829. An early user of the improved compound microscope, he discovered the sweat glands of the skin in 1833, germinal vessicles in 1825, recognized fingerprints as a means of identification in 1823 and noted the protein-digesting power of pancreatic extracts in 1836.

Johannes Evangelista Purkinje was a pioneer to experimental physiology whose investigations in the fields of histology, embryology and pharmacology helped to create a modern understanding of the eye and vision, brain and heart function, mammalian reproduction and the composition of cells. Purkinje died at the age of 82 on July 28, 1869.